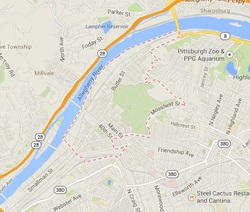 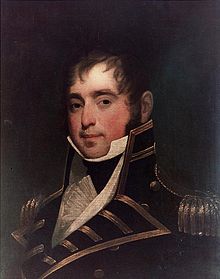 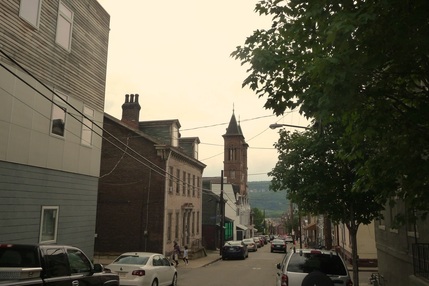 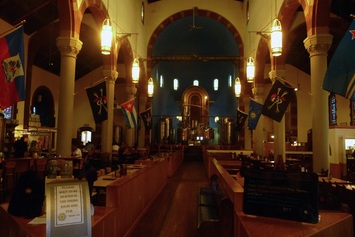 Interior of the Church Brew Works in Lawrenceville
Now, Lawrenceville is all about being ‘New’. New housing, shops, and business of all sorts are making their way to Lawrenceville. However, there are many shops and places well established in Lawrenceville that are definitely worth the trip. Nied’s Hotel and restaurant has been run by the same family for over 66 years and boasts the best fish sandwich in Pittsburgh. Take a trip and see for yourself. If your looking for some variety in your diet, I highly recommend Taste of India or The Church Brew Works,... who says brewing and religion don’t mix? Also, take a cheat day to head La Gourmadine for some of Pittsburgh's finest French pastries. Be ready because they know the more butter, the better. 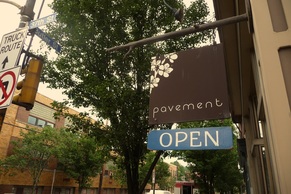 Pavement in Lawrenceville, Pittsburgh
After feasting, visiting some of the cool stores should definitely be on the agenda. Stop by Accezzorize and Pavement for chic clothing and shoes. Or head to Wild Card, the gallery mentioned earlier, which is known for having art from anyone and everyone in Pittsburgh. If you’re into Yoga, you’ve got options in Lawrenceville. Bikram, schoolhouse, and Pratique Therapeutic Yoga are all worth a visit to. After all the food and Yoga Lawrenceville offers, fun things to look for are Arsenal Bowling Lanes to knock down some pins. Or, take a trip to the Thunderbird Cafe for some Local Jazz. Lawrenceville has a fantastic open stage theatre and Arsenal Park for a fresh-air stroll or a game of Frisbee. Regardless, it will take some time to explore all of what Lawrenceville has to offer. 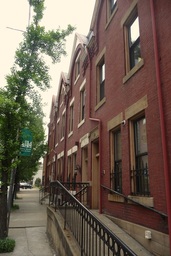 As for homes, variety is best word to describe Lawrenceville. Many classic colonial and Victorian homes reside there. However, there have been many renovations of these previously dated homes to bring them into the modern era. Homes here could be described as ‘modern villas’ seeing that homes vary is color, style, and yet remain at quaint and comfortable size. Participants in the Tiny House Movement would surely have a field day in Upper Lawrenceville. A good portion of residents also reside in stylish and modern apartments and condominiums located there. Parking and garage spaces are becoming a much-desired amenity, but Lawrenceville is extremely easy to walk around and navigate regardless of owning a vehicle. Lawrenceville is one of the hippest neighborhoods and is the epicenter of the arts in Pittsburgh. Regardless of being one of the largest neighborhoods in Pittsburgh, having such a modest start, and being nothing but industry for many years, Lawrenceville has turned itself around into a rich and vibrant neighborhood of culture. New York Times names Lawrenceville the ‘Go-to’ destination and this designation is well deserved. But don’t just take my word for it, take a day and explore all there is to explore at Lawrenceville!

Homes for Sale in Lawrenceville